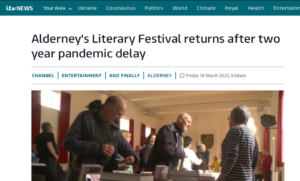 Abraham Lincoln was born 210 years ago today, on Feb. 12, 1809, in a one-room, dirt-floor log cabin in Ho
dgenville, Kentucky.  Lincoln had a harrowing childhood, punctuated by frequent moves and the deaths of his mother, older sister, and younger brother.  As Lincoln told one of his first biographers, “My early life can all be condensed into a single sentence: the short and simple annals of the poor.”

The Southern Lit Alliance will host Jonathan Putnam, author, attorney and Abraham Lincoln scholar, for the next SouthBound lecture on Saturday, March 2, at 2 p.m. in the Arts Building, 301 E. 11th St.

“What would Lincoln think about today’s politics?”  As I’ve traveled around the country this summer and fall discussing my new Lincoln & Speed Mystery, Final Resting Place, I probably got this question more than any other. The question makes sense: Final Resting Place is based on an actual, highly publicized political murder trial that took place in 1838 in Springfield, IL, when one leading politician was accused of murdering his chief rival.  In real life, as in my dramatic retelling, the young Lincoln defended the accused man.

Jonathan F. Putnam is on a journey to showcase a lesser-recognized side of the nation’s 16th president.

The author and trial lawyer spoke at the Amos Fortune Forum at the Jaffrey Meetinghouse on Friday to talk about his books series, the Lincoln and Speed mystery series, and how a young Abraham Lincoln became the president everyone pictures in their head.

“If you picture Lincoln bearded, he grew a beard for the first time during the 1860 election,” Putnam said. “If you think about him bearded, you are essentially thinking about his last five years.”

An interview with Jonathan Putnam

Have you ever wondered what famous people were like before, well, they were famous?

What about Abraham Lincoln? Long before he was president, he had a hard time getting credit to purchase something as simple, as a bed.

In 1837 the future president rode into town on a horse he didn’t own with nothing more than he could carry in his saddlebags.

Joshua Speed owned the general store where he went to buy a bed on credit. He told Speed he hoped to pay him after he began working, otherwise, he wouldn’t pay him at all. It has been said that Speed called it, “the least promising application for credit ever received.”

Instead of selling Lincoln the bed, he offered him a room upstairs to rent in his own apartment. Lincoln went upstairs, set his two saddlebags down, returned downstairs and said, “I’m moved.”

How History Shaped My Mystery: The Remarkable Rivalry of Abraham Lincoln and Stephen Douglas

Stephen Douglas was a towering figure of the mid-19th century in every sense but the literal one. Standing barely five feet tall, Douglas acquired the moniker “Little Giant” early in his public life, and he kept it until his death. And his outsized life fully justified the nickname.

Born into modest circumstances in Vermont and apprenticed to a cabinet maker after his father’s early death, Douglas soon headed west to seek his fortune. He landed in Illinois, where he knew not a soul, and took the state by storm. Though largely self-educated, he began as an itinerant teacher and soon went into politics. He became state’s attorney by age 21, secretary of state by age 26, and a justice on the Illinois Supreme Court at the ripe old age of 27.

Douglas was elected to the U.S. Senate in 1844 at age 30, a position he would hold for the rest of his life. In the Senate, Douglas became the leading proponent for the doctrine of “popular sovereignty”—letting the people of each state decide important issues for themselves—which in the highly charged politics of the time equated to supporting the right of the southern states to maintain slavery.

Today, Douglas’s life is inextricably tied to a figure who was towering in every sense, including the literal one: Abraham Lincoln. The landmark Lincoln-Douglas Debates of 1858, conducted during the Senate contest between the two rivals, set a standard for serious public discourse over matters of intense political disagreement that is well-remembered—though little emulated—today. At the time, Douglas prevailed, fending off Lincoln’s challenge and keeping his Senate seat. Two years later, the men faced each other again, this time in the presidential election of 1860. Lincoln, of course, won that round—and won history.

Much less well-known is the fact that Lincoln and Douglas had been fiercely intertwined rivals—legal, political, and romantic rivals—for more than two decades before their famous 1858 debates….

How History Shaped My Mystery: The Remarkable Rivalry of Abraham Lincoln and Stephen Douglas

Final Resting Place is almost here.  I can’t wait for you to be one of the first ones to read it.  Twenty-nine-year-old Abraham Lincoln has spent his entire adult life running from his past—from the poverty of the dirt-floor log cabin where he was raised, from the dominion of his uneducated father, and from a failed early courtship. But now, in Final Resting Place, Lincoln’s past is racing back to haunt him. 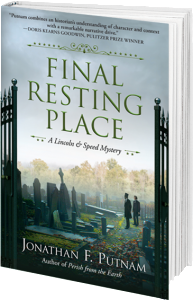 Some authors create fantastical worlds out of nothing, but others, like Jonathan F. Putnam, base their novels on actual events from history, infusing them with their own flair. Here, Putnam delves into the true story of Elijah Lovejoy and his quest to keep writing and publishing his anti-slavery newspapers. Putnam shares how this historical event served as the inspiration behind Perish from the Earth, the second Lincoln & Speed mystery.

I am so grateful for the reception I’ve received on my historical mystery Perish from the Earth since its publication in July.  I’ve had a fantastic time touring around the country and seeing many of you at bookstores, libraries, and industry conferences.  I’ve included a few pictures from 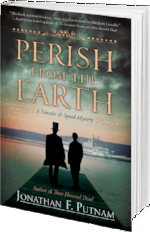 my book events below.

I’ve also been thrilled with the critical reception for Perish from such publications as Historical Novels Reviews , My Shelf, and Criminal Element.