"One of the best historical fiction series on the market." -- BookReporter

"Jonathan Putnam combines an historian’s understanding of character and context with a remarkable narrative drive that kept me fascinated from start to finish."
- Doris Kearns Goodwin, Pulitzer Prize winner 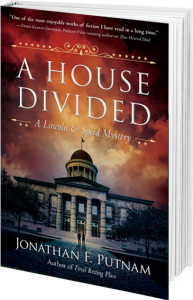 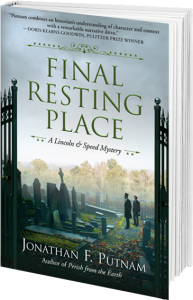 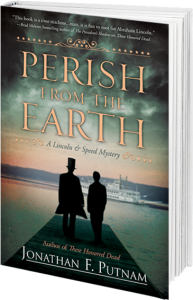 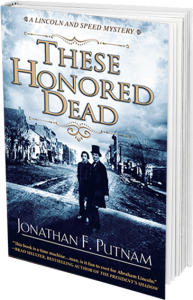 "Putnam had done a great job of bringing the famous man alive ... in this truly cool series."
- Suspense Magazine 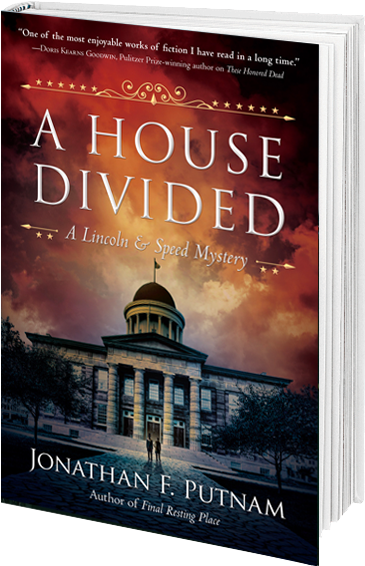 The new arrival of a woman named Mary Todd wedges a rift between Abraham Lincoln and Joshua Speed, but they must resolve their differences if they stand any chance of cracking one of the most harrowing murder cases they have ever faced.In the winter of 1839, a sensational disappearance rocks Springfield, Illinois, as headlines announce a local man has accused his two brothers of murder. Not one to pass up an opportunity, Abraham Lincoln takes up the case of the accused with the assistance of his best friend Joshua Speed to search for evidence of innocence.But just as soon as they begin, Lincoln and Speed find their friendship at grave risk of rupture as they vie for the hand a beautiful new arrival in town: an ambitious, outspoken young woman named Mary Todd. As the trial arrives, can Lincoln and Speed put aside their differences to work together for justice once more? An innocent man’s life may be in the balance―and nothing is as it seems.Re-imagining one of the greatest unsolved murder mysteries from Abraham Lincoln’s real-life trial cases, A House Divided is the most captivating Lincoln and Speed mystery yet from expert Lincoln scholar Jonathan F. Putnam. 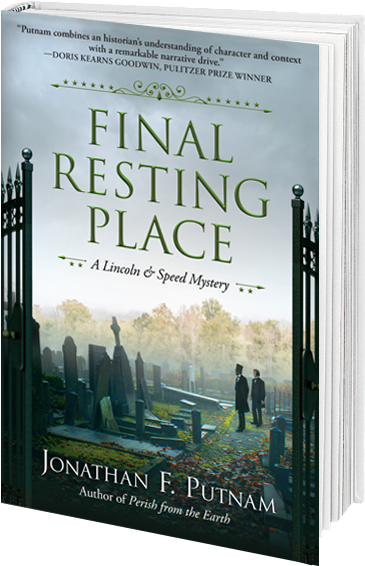 Twenty-nine-year-old Abraham Lincoln has spent his entire adult life running from his past—from the poverty of the dirt-floor log cabin where he was raised, from the dominion of his uneducated father, and from a failed early courtship. But now, Lincoln’s past is racing back to haunt him

It is the summer of 1838, and Springfield is embroiled in a tumultuous, violent political season. All of Springfield’s elite have gathered at a grand party to celebrate the Fourth of July. Spirits are high—until a prominent local politician is assassinated in the midst of fireworks. When his political rival is arrested, young lawyer Lincoln and his best friend Joshua Speed are back on the case to investigate.

It’s no ordinary trial, however, as Lincoln and Speed soon face unwelcome complications. Lincoln’s ne’er-do-well father and stepbrother appear in town and threaten Lincoln’s good name and political future. And before long, anonymous letters start appearing in the local newspapers, with ominous threats that make Lincoln fear for himself and his loved ones.

As the day of reckoning arrives, the threats against Lincoln continue to escalate. Lincoln and Speed must identify the culprit and fast, before Lincoln loses the race to outrun his past in Final Resting Place, the brilliant third installment of Jonathan F. Putnam’s acclaimed Lincoln and Speed mysteries.

"A small-town lawyer who will later become legendary unravels a complex murder plot to save the reputation and life of an old friend…. Putnam's third period mystery is gracefully written, nicely balancing sleuthing with courtroom drama.” -- Kirkus Reviews 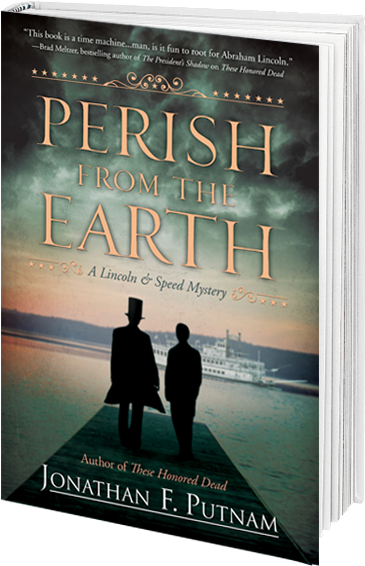 Perish from the Earth

A murder aboard a steamboat forces Abraham Lincoln to make a fateful choice--one on which the future of the nation may hang, if his client doesn't first--in this gripping follow-up to the critically acclaimed and "masterfully crafted" (Alex Grecian) These Honored Dead.

Newly minted trial lawyer Abraham Lincoln is riding the circuit, traveling by carriage with other lawyers and a judge to bring justice to the remote parts of Illinois.  Meanwhile, Lincoln's close friend Joshua Speed steams up the Mississippi River aboard a steamboat owned by Speed's father.  Suddenly, his journey is interrupted when a crooked card game turns to violence -- and then murder.

Speed enlists Lincoln to defend the accused, but they soon come to discover that more than just the card games are crooked aboard the Speed family's ship.  As the day of judgment hurtles toward them, Lincoln must fight to save the life of his client while preserving the cause he holds so dear.Perish from the Earth revolves around a true historical murder that, while nearly forgotten today, was one of the most infamous crimes of the nineteenth century and played a key role in driving the nation toward civil war.

“Perish from the Earth is one of the best books I have read in a long time. I can’t recommend it highly enough. If you are either a mystery buff or a history buff, this book is for you. If you happen to be both, I’m certain you will be captivated by its raw and honest look at this part of American history and by the beauty of the language used to portray the people, both real and imaginary.”
--MyShelf.com 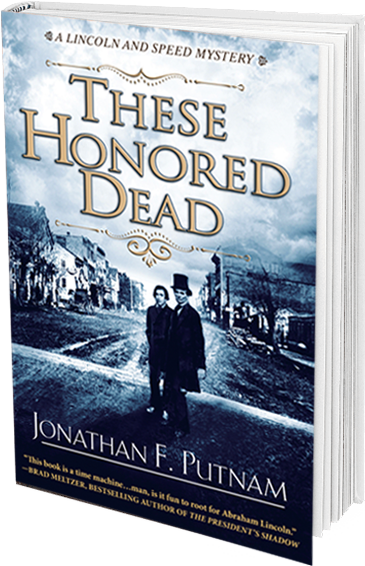 Joshua Speed, the enterprising second son of a wealthy plantation owner, has struck off on his own, opening a general store in Springfield, Illinois. But before long, he makes a surprising and crucial new acquaintance—a freshly minted lawyer by the name of Abraham Lincoln.

When an orphaned girl from a neighboring town is found murdered and suspicion falls on her aunt, Rebecca Harriman, Speed makes it his mission to clear her good name. A widowed storekeeper who took in her niece and nephew, Rebecca is also Speed’s former paramour. He knows she could never be a murderer but needs the legal expertise of his unusual new friend to prove it.

Together, Lincoln and Speed fight to bring justice to their small town, aided by the arrival of Speed’s sister Martha, a headstrong young woman who is determined not to be confined by the prevailing notions of proper conduct for a well-born girl. In the process, they are forced to confront their very different views toward slavery and equal rights—a disagreement that threatens to destroy their friendship. But as more bodies are discovered and the investigation starts to come apart at the seams, there’s one question on everyone’s lips: does Lincoln have what it takes to crack his first murder case?

Critical Praise for These Honored Dead

"These Honored Dead feels so completely authentic that it might very well be a recovered journal from the nineteenth century, peopled with true-life investigators named Lincoln and Speed. But the pacing is so assured and the mystery is so intriguing that it can't be anything but a masterfully crafted modern novel.  Jonathan Putnam has crafted the most gripping debut in years."
-- Alex Grecian, national bestselling author of the Scotland Yard Murder Squad series

"This book is a time machine, and the mystery at its core is equally elegant and brutal.  Just like our history.  But, man, is it fun to root for Abraham Lincoln."
-- Brad Meltzer, bestselling author of The President's Shadow

Give an autographed copy of These Honored Dead as a gift. Mysterious Bookshop in New York City has a quantity of these. They'll ship anywhere. Order using this link.

The Lincoln and Speed Mystery Series

On a Spring day in 1837, two young men encountered each other on the American frontier.  While coming from very different backgrounds and holding very different views on the issues of the day, the two men were to become roommates, confidantes, and lifelong friends.  Their friendship changed each of them and, in some respects, changed the course of American history.

Joshua Fry Speed grew up on a large plantation in Louisville, Kentucky, the second son of a wealthy landowner and judge who raised hemp through the forced labor of some sixty African-American slaves.  After a prosperous upbringing and several years of college Speed struck off for the frontier, hoping to make his own fortune.  He soon ended up running a general store in Springfield, Illinois.

On April 15, 1837, an awkward young man named Abraham Lincoln ducked into Speed's store, seeking bedding for his new residence.  Lincoln was in many ways Speed's polar opposite: he had grown up in a simple log cabin; he came from a broken family (his mother had died when he was young); and he was self-taught.  He had bounced around quite a bit trying to find an occupation that fit his unique temperament and talents: he'd already been a flatboatman, surveyor, postman, and store clerk.  The very day that he met Speed, Lincoln had formally begun his latest profession, as he had been sworn in as a newly minted trial lawyer.

Rather than selling Lincoln bedding Speed invited him to share his room above Speed's general store.  The rest is, literally, history.  Lincoln and Speed were roommates for three years, and the two men remained lifelong friends.  Speed ended up with a front-row seat as Lincoln became a famous trial lawyer and politician, the President who saved the Union, and perhaps the seminal figure in U.S. history.

The Lincoln and Speed Mystery Series uses this slice of American history and lore as the basis for a series of historical mystery stories and courtroom thrillers.  Inspired by the actual cases handled by Lincoln during his long and varied legal career, the series reimagines Lincoln and Speed as a sort of Holmes and Watson, with young Lincoln playing the role of the great man, seeking justice in the courtroom, while Speed plays the role of his right-hand man, occasional sparring partner, and the chronicler of their shared adventures.